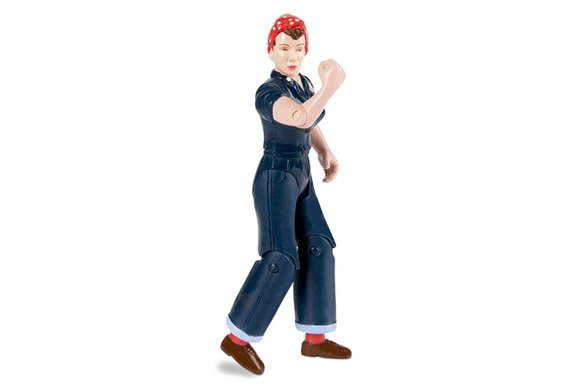 BARBIE could be left on the shelf this Christmas as American parents opt instead for “empowering” toys that offer positive role models for their daughters.

Dolls that depict young women with unfeasibly small waists going shopping and riding horses are being supplanted by characters who program computers or ride zipwires.

Toys that teach girls how to braid their hair are being gradually overtaken by games that show accessible ways to learn about electronic circuitry and engineering.

In response to campaigns by parental pressure groups, large chains such as Target are ending the old division of their toy departments into a blue aisle full of lorries and monsters and a pink one stuffed with glitter, dolls and horses.

“We don’t have a problem with dolls and action figures,” said Carolyn Danckaert, co-founder of A Mighty Girl, an online shop and campaigning group. “It’s just very hard to find ones that feature female figures in empowering ways.”

Toys on sale on her site include a model of Rosie the Riveter, an American Second World War cultural icon.

Barbie, the pert blonde bombshell who celebrates her 56th birthday next March, has suffered a dip in sales over the past three Christmases.

Mattel, the giant toy company that makes her, has been trying to join the drift towards affirmative role models for girls. A special range of Barbies launched last week featuring prominent real women, including the film director Ava DuVernay, sold out within 17 minutes of going on sale. Yet bloggers pointed out that all the women featured in the “Shero” range still had the old unrealistic proportions.

Barbie’s rivals include GoldieBlox, an action figure for girls created three years ago by Debbie Sterling, an engineering graduate from Stanford University in California. Her character invents problem-solving gadgets, such as a machine to help her dog chase his tail or a cable car to help her adrenaline-junkie friend Ruby Rails reach a mountaintop.

An online ad campaign by the company showing young girls acting the parts of Hillary Clinton, the singer Beyoncé, the comedian Amy Schumer and members of the American women’s football team has turned into an internet sensation.

Other engineering toys, such as LittleBits, created by Ayah Bdeir, a Lebanese-Canadian graduate of the Massachusetts Institute of Technology, are trying to appeal equally to boys and girls. The toys are easy-to-use circuit boards that join together with magnets and are now available through large retailers this Christmas.

“Boys are much more interested in the technology,” said Paal Smith-Meyer, the company’s chief product designer, who used to work for Lego. “Girls are much more driven by purpose — they like to make something that is useful, that is solving a problem, something human.”