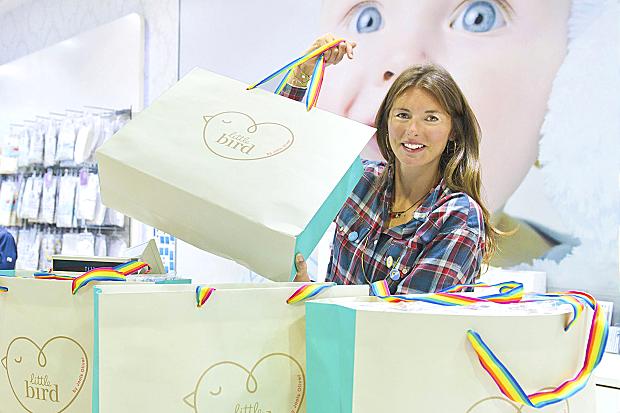 The debut collection of children’s fashion from Jools Oliver has hit the shelves at Mothercare, the troubled mother and baby retailer.

The former model and wife of the television chef, Jamie, created her Little Bird collection to include nursery bedding and accessories, as well as clothes for newborns and children as old as 6.

It will be hoping this latest celebrity collaboration can replicate the success it had in 2007 with the “Baby K” collection designed by Myleene Klass, now a face of Marks & Spencer.

Sales at Mothercare, which this year recruited Simon Calver, of LoveFilm, to head the turnaround campaign, have continued to slide. Last month, it said that like-for-like sales in Britain had fallen 6.7 per cent in the first three months of its year.

Outside the UK, it is doing better. Sales at its rapidly growing international business rose 11 per cent in the 15 weeks to July 14. During the period, the company moved its online business from the Amazon web platform, with the disruption blamed for a 7.1 per cent decline in “direct in home” sales.

That update came as its chairman, Alan Parker, survived a revolt by shareholders over pay. Twenty-seven per cent of them voted against an incentive scheme that granted Mr Parker 114,000 shares. The company said that it believed the share-matching scheme was in the interests of shareholders.

Mothercare’s share price has declined by nearly 43 per cent in the past year. In May, the company revealed that it had slumped to a full-year loss of £102.9 million, compared with a profit of £8.8 million the year before.

Mothercare has outlined a programme of store closures to cut costs in Britain, with the aim of moving towards a network of about 200 shops from 360. That said, Mothercare recently launched its biggest store in the UK, a 30,000 sq ft site in Edmonton, North London.

Inside is a “‘mumspace zone’ for parents to bond with their toddlers”, as well as a 4D ultra-sound scanning studio. Staff equipped with iPads “offer interactive sales experiences” to customers, who can also take prams for a spin in the UK’s largest “buggy park”.

As Mr Calver embarked on a three-year plan to turnaround Mothercare’s domestic performance in May, top of his agenda was a 10 per cent cut in the price of clothing, which he said had drifted too far out of step with low-cost supermarket competition, as well as a new round of cost-cutting.